Shopping Cart
Your Cart is Empty
Quantity:
Subtotal
Taxes
Shipping
Total
There was an error with PayPalClick here to try again

Thank you for your business!You should be receiving an order confirmation from Paypal shortly.Exit Shopping Cart

in view of its widespread use, frequency modulation, FM, is an important form of modulation, despite many forms of digital transmission being used these days.

FM, frequency modulation has been in use for many years. However its advantages were not immediately apparent. In the early days of wireless, it was thought that a narrower bandwidth was required to reduce noise and interference. As FM did not perform well under these conditions, AM predominated and FM was not used. However, Edwin Armstrong, an American engineer looked at the use of wideband FM for broadcasting and introduced the idea against the trend of the thinking of the time. 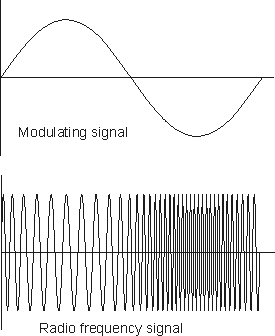 The Concept of Frequency Modulation

The amount by which the signal frequency varies is very important. This is known as the deviation and is normally quoted as the number of kiloHertz deviation. As an example the signal may have a deviation of ±3 kHz. In this case the carrier is made to move up and down by 3 kHz.

The level of deviation is important in many aspects. It obviously is important in determining the bandwidth of the overall signal. As a result the deviation used for FM is different between different applications. Broadcast stations in the VHF portion of the frequency spectrum between 88.5 and 108 MHz use large values of deviation, typically ±75 kHz. This is known as wideband FM (WBFM). These signals are capable of supporting high quality transmissions, but occupy a large amount of bandwidth. Usually 200 kHz is allowed for each wideband FM transmission. For radio communications purposes less bandwidth is used. Narrowband FM, NBFM often uses deviation figures of around ±3 kHz or possibly slightly more. As quality is not as important for radio communications applications, the much narrower bandwidth has advantages in terms of radio spectrum efficiency.

Improvement in Signal to Noise Ratio

It has already been mentioned that FM can give a better signal to noise ratio than AM when wide bandwidths are used. The amplitude noise can be removed by limiting the signal to remove it. In fact the greater the deviation the better the noise performance. When comparing an AM signal to an FM one an improvement equal to 3 D2 is obtained where D is the deviation ratio.

An additional improvement in signal to noise ratio can be achieved if the audio signal is pre-emphasised. To achieve this the lower level high frequency sounds are amplified to a greater degree than the lower frequency sounds before they are transmitted. Once at the receiver the signals are passed through a network with the opposite effect to restore a flat frequency response.

To achieve the pre-emphasis the signal is passed through a capacitor-resistor (CR) network. At frequencies above the cut-off frequency the signal increases in level by 6 dB per octave. Similarly at the receiver the response falls by the same amount.

Both the receiver and transmitter networks must match one another. In the UK the CR time constant is chosen to be 50µsS. For this the break frequency f1 is 3183 Hz. For broadcasting in North America values of 75µs with a break frequency of 2.1 kHz is used.

Before looking at phase modulation it is first necessary to look at phase itself. A radio frequency signal consists of an oscillating carrier in the form of a sine wave is the basis of the signal. The instantaneous amplitude follows this curve moving positive and then negative, returning to the start point after one complete cycle - it follows the curve of the sine wave. This can also be represented by the movement of a point around a circle, the phase at any given point being the angle between the start point and the point on the waveform as shown. Phase modulation

The list below gives some of the forms of phase shift keying that are used:

Everything to wanted to know about Mototrbo but didn't know what to ask!

If you are interested in learning about DMR and or P25 check into the on-line class (el-freebo). You must register for these classes.

Only sign up if you are serious about learning, Tait puts on this informative class at their expense Please don't waste their resources.

For comments or questions about the